Sol LeWitt (American, 1928 - 2007) is regarded as one of the first coherent proponents of conceptual art with his writings, Sentences on Conceptual Art (1969), LeWitt's work continues to be regarded and referred to by a younger generation of artists as one of the seminal investigations into 'idea' and 'concept' art. LeWitt’s wall drawings are described with concise language and specific diagrams which designate the way in which they should be executed. All wall drawings are drawn directly on the walls. When wall drawings are moved to a new location, the work must be meticulously re-scaled to fit in the new location. LeWitt’s widely recognized geometric forms, first executed in black, white and gray India ink, evolved towards volumetric forms in translucent layers of primary colored permanent ink, at times reminiscent of Italian frescos. By the late 1990’s, flattened forms in acrylic colors covered entire walls in simplified yet exuberant compositions.

Sol LeWitt has had over 30 one-person exhibitions, and is represented in the collections of major museums worldwide. He has been the subject of retrospective exhibitions at The Museum of Modern Art in New York, the Tate Gallery in London, The Kunsthalle Bern, and the Stedelijk Museum in Amsterdam, among other international venues. In December 2000, the Whitney Museum of American Art hosted an all-media retrospective that originated at the San Francisco Museum of Modern Art and traveled to the Museum of Contemporary Art in Chicago. Sol LeWitt: A Wall Drawing Retrospective, a landmark collaboration between the Yale University Art Gallery , MASS MoCA , and the Williams College Museum of Art, opened to the public in November of 2008 at MASS MoCA in North Adams, Massachusetts. The exhibition will be on view for 25 years and is housed in a three-story historic mill outfitted with a sequence of new interior walls constructed to LeWitt’s specifications. The exhibition consists of 105 drawings that LeWitt created over 40 years from 1968-2007. 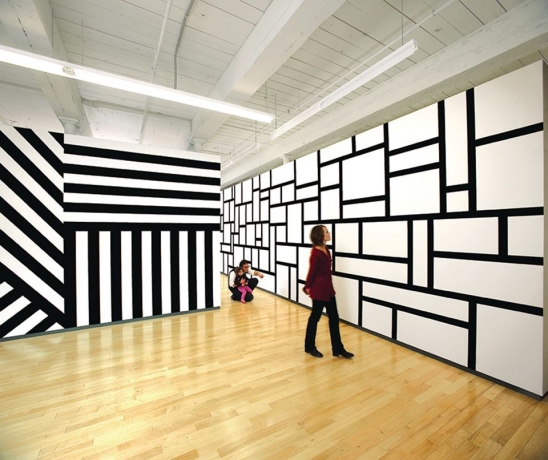 The Massachusetts Museum of Contemporary Art celebrates the tenth anniversary of its exhibition, Sol LeWitt: a Wall Drawing Retrospective, by adding another decade to its long-term presentation.

Review of Sol LeWitt: A Wall Drawing Retrospective at the Massachusetts Museum of Contemporary Art.

Interview with the artist by Saul Ostrow.